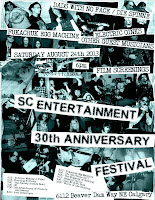 The SC festival was good.. I would be willing to say it was at least as good as the festival 15 years ago... I probably would have liked there to be more people in attendance, but there was enough that it wasn't embarrassing, so I call that a win. And the people that did show up were so awesome, I can't complain at all. Even Jessica, our truest hard core fan from the 1990's showed up which was an exciting surprise for us. 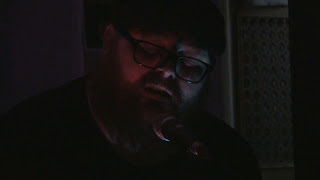 The evening started out with some films and then opening for EO was Johnny Auchie, who had previously appeared in the short film 'Planting Buttons' as well as being in the latest feature film 'World of the Uncanny' as the mighty wizard Wendal. He played 3 songs that made every one weep with happiness.. the dude is crazy talented, and we were lucky to have him. Also he has been our friend for like over 20 years, so it is always just nice to see him. To check out his full set, you can follow this link:
http://youtu.be/UAf_0dETxAw 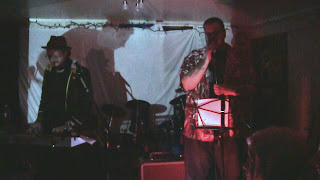 Next up was the mighty Electric Oinks. The very first band SC Entertainment ever produced from way back in 1984. The set spanned their whole music journey to ridiculousness. The last time we played as EO was in 1997. But this year we came out with a new album, and have been blowing to collective minds of the universe ever since. Check out some songs from the show here:
EO - Pee Pee Time
EO - Ghost Rape

Unfortunately due to a sickness our third performer Jodi Robertson couldn't make it. She also has acted in World of the Uncanny as Mystic Kate. I suspect we will get her to play a show for us soon. 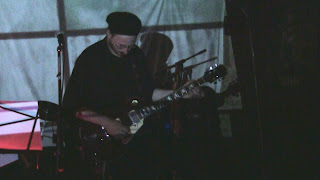 Next was Fukachuk Egg Machine (aka me) it was kind of my first time ever playing a show like this. I had played a bunch of times before, but it was mainly just me playing a live soundtrack to a film that I made.. this time it was more of a proper show, with me playing real songs in a set, just like a regular band. It was awesome, and I loved every minute of it.. the last time fukachuk played anything at all live was in 2005 at the science center.. 8 years ago. I missed it a lot.
Here are a couple songs from the fukachuk egg machine set: 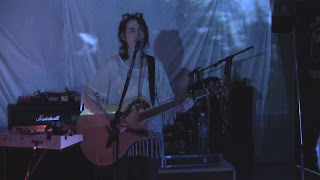 Next up was the heavenly intonations of Emmelia Taylor, (Marla from World of the Uncanny)... her set was just one song, and even that was cut a bit short unfortunately, but who can blame her, she just got married this week, and was a bit on the too busy side to do much practicing. But you will see on the video below, what she did play for us was quite amazing. 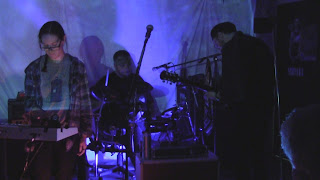 And closing the evening was the greatest band this side of kalamazoo, Dads with no Face! However due to a recent family tragedy our amazing brother Scott was unable to show up to round out our trio of hypnotic squelching power.. lucky for us I am married to Elaine Boyling, and she stepped in with one day notice and played bass on the keyboards for us.. learning all the songs in a matter of a couple hours. And she did well, because we totally rocked out in a massive kind of way, bringing back all the excitement of the shows we used to play so many years ago. Check it out below.

I plan on uploading more full songs from the concert in the next few days, but in the mean time, please watch this compilation of highlights from the festival... it will blow your freaking mind wide open.