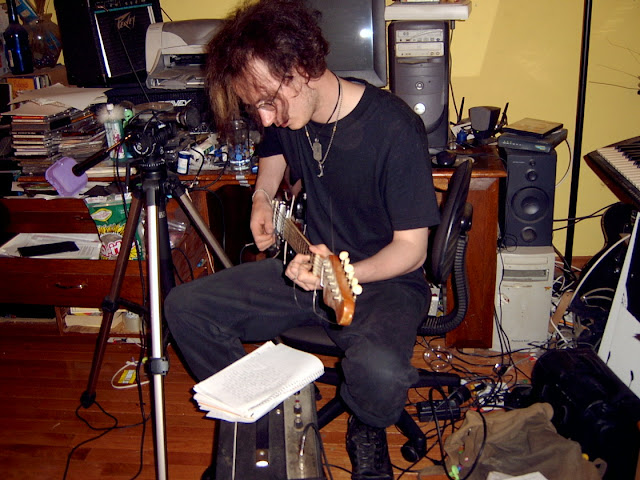 Yet another another quite dark year in the land of my creations. One of the darkest things I ever made was the Near Jennifer films. They were a trilogy of animated tales about abuse and women and children and mental disorders and all sorts of fun things like that.
Check them out here: http://scentertainment-films.blogspot.ca/2004/06/near-jennifer.html
They were screened that year at the Albert College of Art and Design.

I made a few other short films that year as well. I was experimenting with different kinds of animation, that would make a more grand appearance in a couple years.

Veltrax talks about Drinking and driving
One with the fish
and Marble street notebook.


The big hugely deep dark thing I made that year was the album 'Boneless leg dog discovers the city" and if that cheerful album wasn't enough, I made a rather involved film for the whole thing that played at a strange little art festival downtown. The film was called "The Three Sticks" and had death, blood, loneliness, despair, and whatever other words you can use to describe my pretty frail mental state at the time.

You would think that was enough doom and gloom for one year, but you would be wrong.. I also made a self titled solo album (even though all my albums were solo albums) that was a total gloom fest self obsessed dive in to a pit of darkness. It really doesn't get much better than this...

That is a lot of music for one year you say.. but oh, wait.. me and Elaine had recently formed the giant megalithic super band called Death Ray Gun! And what did we do with this amazing thing we were creating? What else? Record 28 songs and release a huge double album!

All that plus I completely re-edited Bo-Bo 5, and Fowler Creek for DVD releases, was busy getting a 4.0 GPA in film school, and working part time at the print shop, and there was a new EO christmas song, and a bound and printed retrospective book about fukachuk that included 2 CDs. Looking back on it it seemed as though I was trying to avoid reality. And this wasn't even the busiest year I would have...