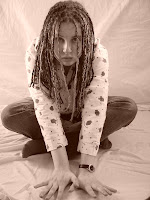 In 2002 Elaine was finishing up the Violet Tumble trilogy with the release of the Eating record, and I made a record called 'A day on marble street.' That was sort of an experimenting record trying to use all sorts of different kinds of computer programs and other electronic things to make noises. I was also trying to get some kind of a record deal outside of my own little universe.. but that never happened. Netwerk records liked me, but they didn't love me. I never really tried anything like that ever again I don't think.


Paul was gone, and I hadn't made a real film in years. He had been pretty much in charge of most of what was happening in SC Films outside of the Bo-Bo movies. But I had had enough of nothing happening, and making films was one of my favourite things that we had ever done, so I took it upon myself to revitalize the excitement of SC Films. I got a video camera.. that was the first step.. now I could do anything, so I did. The first day I made a short film, but that wasn't enough for me... I decided I would make a massive huge feature length film, with special effects and animation and a cast of like 20 people, and no money whatsoever. It was called Cindy Mae and the Collar of Doom, and it was like 2 hours long by the time it was all done, and in retrospect, it dragged on a lot, but everything was there.. Beefart & Cheenkaw made a triumphant, all bet brief return to form, space cats, slit throats, exploding lakes and bizarre dream sequences. I even made my first computer animated short to go with the film. Anyway, it proved to me and everyone else that SC Films could do anything it wanted to again, even without the genius of Paul, and it was full steam after that.