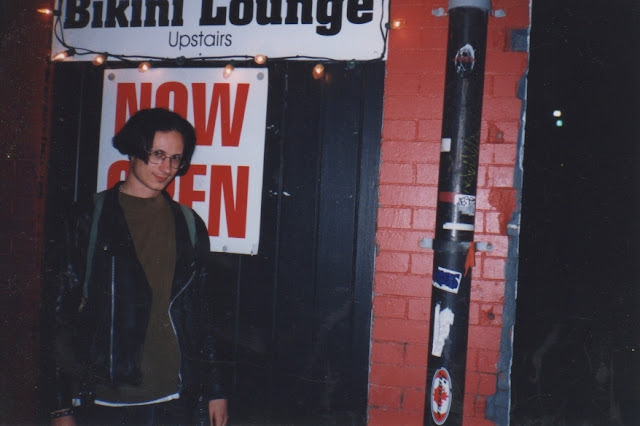 I was thoroughly obsessed with trying to figure out what fukachuk egg machine was all about in the year 2000. It started with me recording the album 'Three Sticks,' It was some serious stuff going on.


That year also finally saw the realization of Bo-Bo 6, which we had been filming for over 5 years, and using various scripts.. one day me and Paul just decided to see what we had, and we put it all together, and wrote and shot a bunch of scenes to connect everything together, and we finally made the conclusion to the Bo-Bo saga... Bo-Bo 6! It was strange and weird, and because the year 2000 was already turning in to one of the weirdest years of my life, what with the swimming in fukachuk land 24 hours a day non stop.. it had an atmosphere that was so great and spooky.. I kind of love the movie.. for the Bo-Bo-Baboon-Boy scenes alone it is totally worth watching.


Me and Elaine were becoming really close friends, and we finally decided to combine our talents and put together an album. It was called Fukachuk Pandora Machine (combining our two project's names) and it was mostly Elaine doing spoken word or singing over top music I made.. It was basically the first Death Ray Gun album, but the name was different.

Soon after that album Elaine would start making her Violet Tumble albums, which would change the world forever... and I would start work on another Fukachuk Egg Machine record that would be released closer to the end of 2000, it was called 'Trip Music' and it was mostly about me wishing I could take a trip very far away.. but I didn't get to.

We made a sequel to the Shirtless Hill called The Art of Duchess, Paul and Scott made the final instalment in the Humanity on Fire films, and Paul and Earl and Lee made Freak of Nature.