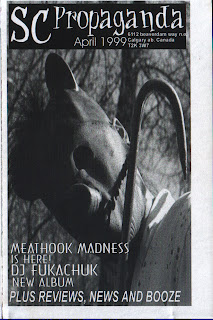 1999 was another strange year. It started out with the release of the fukachuk egg machine record 'Giant Killer Robots' which was a mostly instrumental electronic album about a fictional apocalypse set about by giant killer robots. In real life, me and Terry were driving around the city actually looking for Giant Killer Robots.... we found a few. I was soon to be homeless and living on the streets for a short time until I ended up moving in with family, We were making the feature film Meathook Madness, which was a new shot at making slasher films without Bo-Bo.. we were also still at this point randomly shooting scenes for the mythical Bo-Bo 6 that seemed like it would like actually happen. There were several other short films made that year.
Check them out here: http://scentertainment-films.blogspot.ca/search/label/1999

As I was getting settled with trying to live again I made the fukachuk egg machine album 'Popsicles and Tape' which was pretty much about that whole idea of getting myself put back together again using nothing but popsicle sticks and tape. This was the first ever album we made that was recorded on a computer, and put on a CD. There was also a Die Spinne re-mix album that got made that I don't really like to talk about...
Near the end of the year I met a very interesting and strange girl on the internet who made her own music, her name was Elaine Boyling and she would soon make SC more exciting than you ever thought possible.