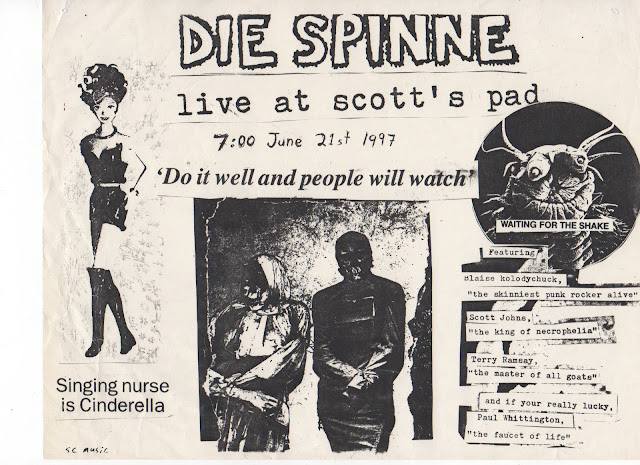 1997 was another busy year in the land of SC. The very first thing I did as 1997 started was put together the die spinne record 'World's most powerful psychics' It was die spinne at it's most hypnotic and included several exciting live tracks as well as some hypnotic instrumentals and other songs. Die Spinne were becoming more and more popular and were getting shows at local pubs and other places like the art college, though we were still playing almost every weekend at Scott's house. 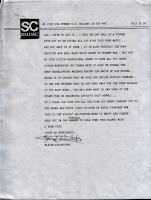 I started up the mighty SC mailing list this year I think, and I was sending out newsletters all the time telling people about the ways of SC and how cool we were and how if they bought tapes and stuff from up how everyone on Earth's lives would be better. It is of little surprise that the SC Newsletter would eventually be called SC Propaganda. One of the newsletters I sent out included a compilation tape of live die spinne songs.. it was a pretty amazing tape, and showed people the true meaning of everything SC was at the time. It was called 'Suicide' and inexplicably had a picture of Terri Dennis on the front for no apparent reason other than she photographed well. Anyway, the tape was another hit. 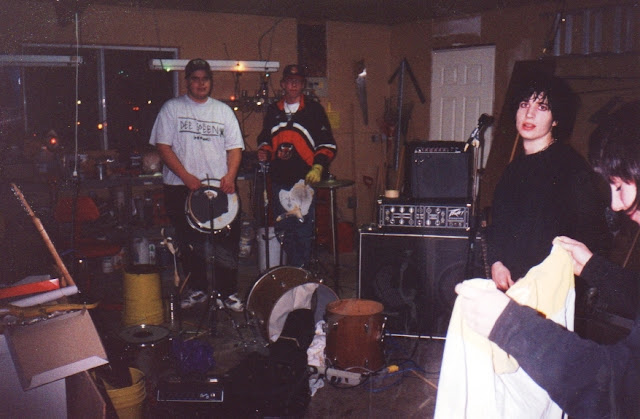 I was living in a tiny apartment which may have just been a storage room in the basement of a building that was turned in to an apartment.. at any rate it was awesome and there were mice and bugs and it was disgusting.. but it brought out a lot of creativity I think. That was where me and Terry one night, having very little sleep for a couple days decided to do some more EO songs.. these were classic amazing tracks.. and instead of making a new record (there wasn't really enough songs made that night to fill a whole album) we took off a couple of the songs from the 1994 freelance photographer album, and added on all these new songs and re-released freelance photographer as it stands today. There were a lot of weird nights like that in that place. 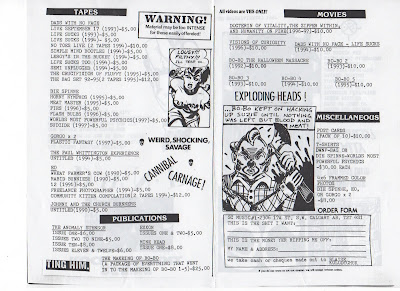 We were still randomly shooting bits of what would become Bo-Bo 6, but this year marked the start of a plethora of short films that we would make. Some people argue that these are the best things SC has ever done on video.. who knows, either way they were fun and strange.

We were all experimenting with solo projects that year as well. Terry and Paul formed Gorgo X 2, which was a sort of strange punk rock comedy band that had songs about either mean or disgusting topics... or just stuff that was bizarre, at any rate it gained a quick cult following, and we played it live several times.. Paul would often wear costumes on stage. Scott was busy creating his noise music project 'Smoth' which he is still involved with to this day. I would start experimenting with making music by myself under the name of DJ Fukachuk.

Die Spinne spent a good deal of the year making new songs as well and recording. By the years end we had released what would be our final album, Die Spinne Visit Zombie Island. It was hypnotic and punk and about monsters and other strange things, and was kind of the perfect Die Spinne album. Also by the end of the year I had daughter named Mikaela.. 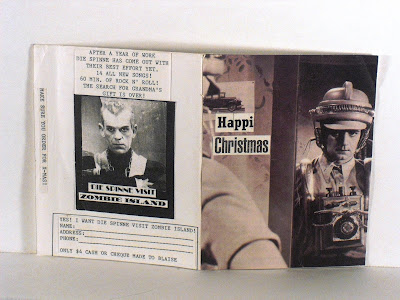