1995 was a strange year of changes for SC Entertainment. Though in the midst of all this change we still made some pretty astounding things, including probably the most memorable and well made Bo-Bo movie ever... the mighty Bo-Bo 5. It was a huge movie.. it was long and complicated with all sorts of special effects and various exotic locations, and it was also to be the last feature length film would would make for several years. But it was awesome, and is still one of my favourite films I ever made. Soon after Bo-Bo 5 Paul would start work on a variety of short films exploring his own mind, and our days as feature length horror film makers was  cut short.


Dads with no Face was to play their last show ever.. there was a lot of tension, and we eventually played a show without the new Terri on drums, it kind of caused a backlash and Dads with no Face was over. Our last ever recorded show was put on a cassette and called 'The crucifixion of Fluffy' it was kind of an awesome show. You can hear the last 7 minutes of Dads with no Face right here: 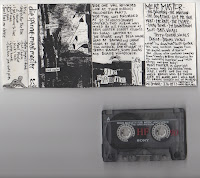 After Dads broke up there was a bit of a break and then me Terry and Scott got back together to form a new band 'Die Spinne' You would think that it's the same three guys, so the band would be basically the same.. but that wasn't the case at all.. the idea of it was totally different, and it showed. It was a much more mature band in a lot of ways. Terry wrote and sang more than half the songs this time, and scott was on bass. Before the year was over we has released 3 albums. 'Horney Nymphos,' 'Die Spinne Live,' and 'Meat Master' It was a strange time of starting to be grown ups, and most of our friends from the carefree days of dads with no face and Bo-Bo were off doing different things, even I was about to become a father for the first time.