1994 was one of the busiest years in the history of SC Entertainment.. 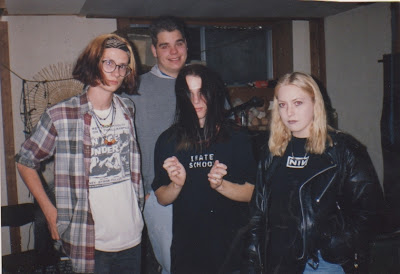 In Dads with no Face the first thing we did that year was make the Life Sucks movie, it was a sort of documentary concert film, and even though it may not seem like it looking back at it now, it was a huge effort to get it made. Shortly after the movie was made, me and Terry one day found Scott Johns in our practice area.. to this day we don't know how he got down there.. but we soon decided that he would be a part of Dads with no Face. And from that moment on we were the super loud 3 piece band we were destined to be. Our shows got more frequent and more out of control as the year went on, and at one point Terry was temporarily out of the band for excessive drug use.. or some other such punk rock thing. At any rate Terry was out, and Terri the girl was in as our new drummer. Me and Scott were just sort of playing guitars on the street, and she gave us a dollar, so she was in. We only played as me Scott and Terri the girl for one or two shows before Terry came back, but this time he was on bass, making us even louder, if that was possible. 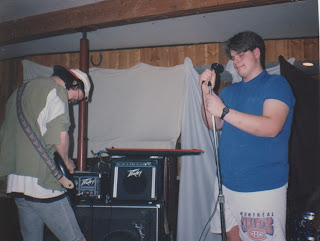 There were other music projects happening that year as well. 1994 marked the year of the big EO comeback special, which was a new album and a concert. The album, Freelance Photographer, was not the version available today, as the new version also contains songs from another recording session that was done in 1997. But it was still ridiculous and good. Me and Terry just decided one night to record the whole album, kind of like the old days. The concert was also a success, and again after that EO would disappear for a few more years. 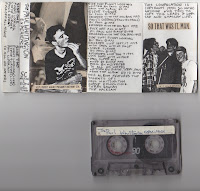 Also that year was the Paul Whittington Experience album.. which was a collection of bizarre songs by Paul and us all.. it was a predecessor to what would become Gorgo X 2 in a few years. 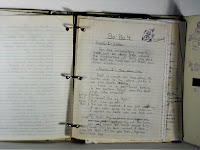 In the world of SC Films we made Bo-Bo 4. which introduced us to Osiris and delved deeper in to the backstory of Bo-Bo and Rolf. The movie was made, and then we found out almost all the footage was unusable because of a camera malfunction, so we had to remake the whole thing again. We were rather disappointed at the time, but making the whole movie a second time definitely made it a better movie than it would have been. 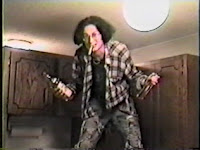 This was also the year of Fowler Creek, which was our attempt at making some sort of soap opera. It ended up more of a weird comedy gangster thing that was just kind of amazing and cheap in so many ways. it became a big hit among our friends, and I was called Cheeko for many years after that.. and Terry is still called Leroy to this day.

Also that year me and Terry had decided we should start making comics again, so we spent loads of time working on them. I was making a new series of Stensor comics, that were actually just amazing genius comics.. Terry was doing the same with Exxon. I got up to about issue 13 of Stensor. Several years after that, during one of my many frequent house moves, the whole series I made went missing, and it has never been seen since. I am still pretty sad about it, they were the best comics I ever made.

1994 was a lot of hanging out in basements and making new friends and partners in the world of SC.