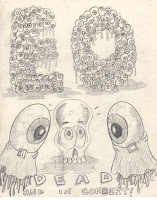 From my research a few important things happened in 1991.. first we made the
very last EO cassette (For a number of years anyway.) This one had a couple songs sung by Paul, and it's outrageous lyrics and over the top ridiculousness made it a strange sort of hit album.. I recall hearing it being played in people's cars passing by us... it was very silly.  After that, we played a live show at our friend Sean's birthday party, this was kind of the last thing EO did before parting ways.

After EO Terry went on to be in a band called Neighborhood Threat with a couple of his friends from school, and I went on to be in a band with Barrett Pedersen, Andrea Gammon, and Julie Kirsch called Original Deficiency. It was interesting being with new people for both of us, and I know my new band was kind of all consuming, the four of us spent every moment together, and hung out a lot.. and when we made music it was pretty bad. Though after new year's eve of 1991 Original Deficiency would break up. 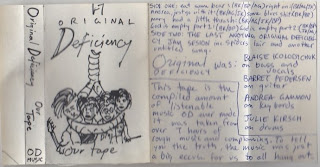