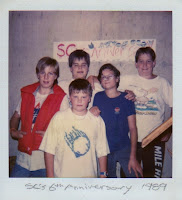 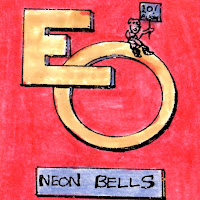 If 1987 was the start of SC films, then 1989 was the year that we organized ourselves as a film making force of nature. And I will be honest, I can't remember where we got the video camera, I know sometimes we signed one out of the library at school, but regardless of where the cameras came from, we were using them, and writing tons of scripts and ideas down. We made the amazing, though now lost forever TV series 'Johnny Mischief' which to this day remains as one of the best names for anything we ever came up with. It was about a time travelling kind of drunk who ends up on a planet where the only person left alive is Julie Kirsch on account of everyone there has rigamortis, luckily Johnny Mischief has a picture of Blaise with an afro in his pocket and that is the formula to save everyone. We also made and have since lost the film 'Dimensions of Death.' The name thankfully was recycled in the 2011 film starring Beefart & Cheenkaw. Anyway, the most important thing we did was to make the very first Bo-Bo movie, though his name was Tommy, and he was trying to get revenge on his kid brother Tim because Tim at one point interrupted some kind of satanic ritual Tommy was doing... anyway, the mask was the same, and there was a lot of killing. It was called Halloween Horror, it is extremely bizarre (and / or boring), and you can watch it here:

Eo was having a great year with the release of 'Carbonated Mustard' and 'Neon Bells' both electronic double albums by me and Terry. There were also some re-mix albums, and a side project called 'Johnny and the Church Burners' which was a sort of Soft Cell cover band thing, but it was also a lot more.

There were still comics being made, but we were starting to focus on magazines more, things that went along with our horror movie ideas. I believe the last issue of the original series of Stensor comics was this year. We were about to go to high school, and everything would get a lot more seriously stupid after that.