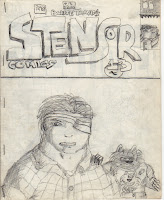 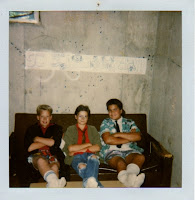 1988 was SC's 5th Anniversary, and it looked like this picture.. we even wore ties to celebrate the occasion.. it looks as though Terry was far too punkrock to join the celebrations that year, or more likely me and Ryan were annoying him too much. 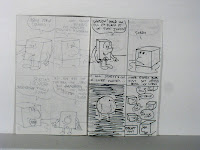 Another amazing year of comic making happened, and my main superhero 'Stensor' grew in to a more complex character after issue 10 of his original series. Mr.Ice Cube's secret origins were finally revealed and Trevor continued to make comics and send them to me through the mail.

In the land of the Electric Oinks, me and Ryan made a few insane records, such as "Mutated Dog" which was to be the first in a long line of electronic 'synth' albums, and the double album 'Cat is Psycho' which was random and scary, but included the song Fluffy, which would be played for years and years to come. That concluded the trilogy of the Blaise and Ryan version of EO.. and that year the first album from the final version of EO with Blaise and Terry in control, was released. The mighty 'Arachnid' which was an electronic masterpiece (made by 12 and 13 year olds.) 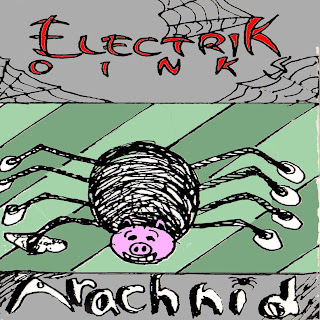