Also, I recently made this. I may have it on display along with other objects of curiosity at the SC 30th anniversary celebration. 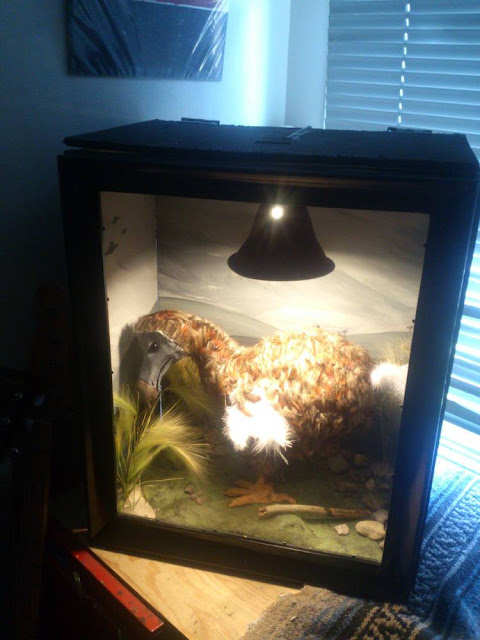 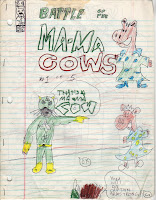 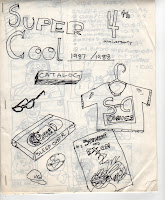 Hooray! We have reached 1987! You see, 1987 was the year SC Films started.. and it was all due to the fact that my very cool brother Lafe worked all summer long to pay for the rental of a top of the line 8mm video camera from the video rental kings at Granada. He was making two epic low budget feature length films, but while he was at work every day, and actually most evenings, me and Terry were sneaky using this video camera to make our own films. We made probably 100 films that summer, and I even started doing my very first stop motion animations.. which was quite a huge task on that video camera.. click the button twice really fast, then press play, go back like 6 frames, go back to camera mode... for each frame... We made a ton of horror movies, because we were at this point deeply obsessed with all kinds of slasher films. Here is a trailer from 'The Sleepover' which was basically Terry in a Jason mask killing his friends at a sleepover. Please note my ultra cool home made SC Comics T-Shirt, and probably the greatest bathroom death scene in the history of the world.

Also enter the era of Blaise and Ryan's version of the Electric Oinks. It was crazy, screaming, bizarre subject matter, and hilarious. Actually everything that I did with Ryan Terlaak was either hilarious, or offensive in some kind of fantastic way. Our first EO album together was 'Babies with 9 heads'

The amount of comic production this year was probably the greatest of all time as well, and included like 30 issues of SC Magazine, that me and Terry banged out in one strange night. Anyway, SC was having a very good year indeed. 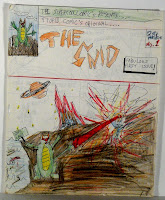 In 1986 we again were making crazy amounts of comics, and also having a rivalry with another comic group in the school, Laser comics.. one of our members took off and started it up, however it was short lived and in the end SC triumphed over all. Trevor moved away but continued the SC ways out on the west coast, and in the land of EO, I made a pretty complicated record, using tons of over dubs and echo and strange stuff, it was called 'My Larynx got ripped out by a Puma' and it was the last EO album I was to ever make alone.  On August 27th 1986 we had our first SC Anniversary celebration for our 3 years of existence, I recall doing some 'blaise' dancing in my basement.. it's kind of like break dancing, only it looks more like an epileptic fit. 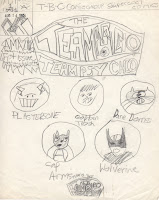 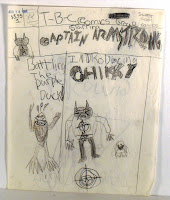 1985 was basically a massive year of making comics and expanding the mighty SC empire.. people like Trevor Phillips and Barrett Pedersen were in my basement on a daily basis slaving away making comics under the SC name. EO was continuing. though I believe it was mostly just me making the tapes at this point. I also recall trying to start up a new band with some other people that was called The Leather Teddy Bears... Sounds kind of like gay erotica at this point, but back when were were like 9, it really didn't. Me and Terry invented our staple superheroes Stensor and Exxon. 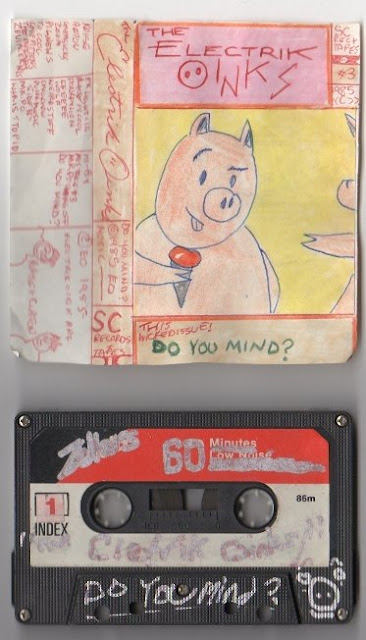 1984 was the year that SC Music started. And it started with a song I wrote called Cat is Psycho, which was essentially about a cat that I had who kind of went psycho and started trying to kill all the other living things in the house. So I thought a song should be written to commemorate such an exciting event. So I made the song, using all kinds of exciting tape to tape dubbing techniques, and it was so much fun I made a whole 90 minute cassette of songs. My friend Clayton also helped with some of them, and we named it The Electric Oinks (EO for short.) That started the whole thing with making music...

Oh, and we were still making tons of comics.. for a while it was called T-B SC Comics (Terry, Blaise) and then T-B-C SC Comics (The C is for Chris.. though I can't honestly remember him ever making an actual comic.) SC was becoming a bit of a club for our friends. 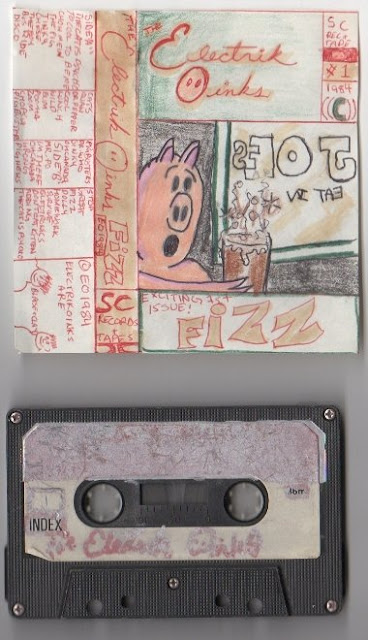 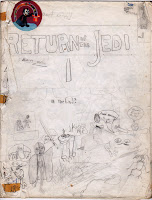 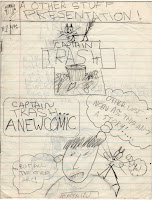 I am officially starting to get all nostalgic about SC with it's 30th Anniversary coming up in about a month, so I am going to try to post a new article every day until then.. going through the 30 years of SC awesomeness. (I was pretty productive most of those years.. but I can't guarantee more than a couple sentences sometimes... First up is our first year 1983. That was the year Return of the Jedi came out, and in a way I blame that, as well as my massively creative brother and sister for the creation of SC Entertainment... you see after Return of the Jedi came out, and I went to go see it, my imagination went wild and I needed to create things.. I was already a huge fan of comics so I started there.. I started making my own Star Wars comics.. and also my very first superhero Captain Trash. Me and Terry were already friends, and our love of Star Wars and drawing turned us into a team.. and on August 27th we were sitting on his front steps and we came up with a name for our comic company, and it was Super Cool Comics... (SC for short. Keep in mind, we were freaking 7 years old!)
A couple weeks after that happened, Elaine Boyling was born from the midichlorians of SC's creation.

30 years is a long time, and we plan to celebrate in the traditional SC way.. forcing our friends to watch us play music, and make them sit through screenings of our films.. all the while drinking way too much. August 24th is the day of excitement.. there is a facebook event with all the info, and if you actually wanna come, please send me a message and I will give you all the details.

The exciting part of all this is there is going to be some crazy special live performances that you may not get to see ever again...

Dads with no Face / Die Spinne

and maybe if you're really lucky EO will play as well...

Please check out our new on-line shop for CDs and DVDs and all sorts of fun stuff.

It should make buying stuff from me easier.