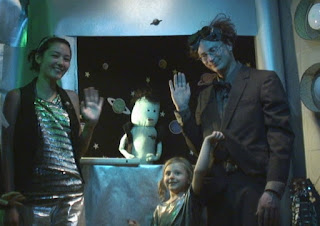 Last weekend almost the whole crew of the new Space Station Zero show got together and did loads and loads of filming! It was super fun and worked out amazingly! Captain Blaise and Captain Zeep were in good form, and Captain Marisa is more amazing and funnier than she has ever been! In one episode even Captain Elaine, who usually only transmits her messages from Earth even visited the Space Station for a bit! And some new friends who you will get to meet, like Captain Suzie, and Space Cadet Miette, who are staying at the Space Station, while Space Station Yellow 52 is getting renovated. And There are even more surprises to come in the months ahead.

I plan on the first episode of the new series to hit the internet some time in early August... with episodes following that every couple weeks. You will be happy to know, that due to lack of money we were unable to sell out, and the show is just as much fun as it always was... with piles of songs and crafts and cartoons and all the space station action you can imagine.

I will keep you all updated, and remember to go to http://spacestationzero.com/ for all the latest news!
on July 07, 2010