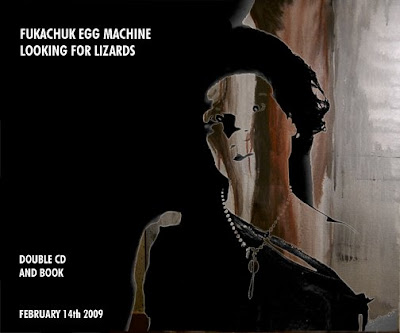 I have been working almost every single night non stop for the last 3 months or more on a fukachuk egg machine record.. heck, I started recording some of this stuff before the last record even came out... any way it is nearing being finished now.. and will be released on February 14th. This is a very important record and I just wanted to tell you it was coming. It will be a double album.. something fukachuk has never done before.. it will have 25 new songs and be more amazing than anything you have ever heard in your life. anyone who knows anything about me knows that the last few months have been.. well.. eventful, to say the least. but my point is that I have obviously had a lot to write about and think about and scream about and sing about... my other point is that this is a good record.. and i have been doing things with music that i have never done before.. and it is all very exciting and very big.. crushingly so.. anyway, you don`t come across a record like this very often in your life.. it is called "looking for lizards." disc one is titled 'lost in the forest' and disc two is titled 'building the swing'.. from start to finish the whole album is connected and lays out a story and an idea, and takes you through most parts of all the things that have made up fukachuk egg machine over the last ten years. I can't really stress enough how much this record really means to me.
It also includes a 52 page book. Because there is so much that goes in to the whole 'looking for lizards' package, I won't be making too many of them. I may have a draw at some point over the next couple weeks for some free copies.. so keep watching for that. and as always, if you aren't recieving the sc e-mail newsletter, please send me your e-mail address to be put on my mailing list, so you don't miss out on exciting things like this record.. and free stuff.. and everything we do here.
go to the fukachuk website to watch a commercial I made for the new record.
For those of you who might unfortunatly miss out on owning an actual copy of 'Looking For Lizards' because of it's limited release... I will also be making all the songs available in a download package with art and stuff for anyone who wants it.. but a little later on.. If you are desperate to own one after all the free copies are gone, I will make you one, but I will have to charge you.. Just because it is a lot of work and costs me money to make. (But it is worth it for sure)
I will sort this mess out before the release date... don't worry.
I am also in the middle of completely re-designing the fukachuk egg machine website, to make it far less user friendly, and more confusing than you ever thought possible... but that project is probably going to take a while, as i have rather large plans for what i want to do with it.
Anyway, thanks.. take care. wish me luck.......