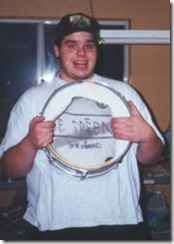 after the demise of dads with no face in april of 1995, nothing musically happened for several months. finally blaise kolodychuk, terry ramsay and scott johns decided to form a new band, "die spinne", and tried to take a new musical direction. with scott now playing bass and terry taking over most of the vocal duties, they made more hypnotic and mellow songs, a far cry from the insane mayhem noise of dads with no face. the songs were more structured and had more melody, but eventually, after playing live a few times, they fell back into the old punk rock stylings they were so used to. after combining all of the new with the old, they had found the sound of die spinne. the alb 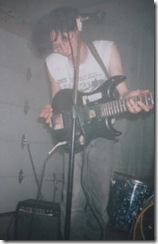 um pies came out in january of 1996 and was a perfect example of this sound wich had never been heard before. the shows definitely were not like the shows in the days of dads, but the accual sound of the band was better,  and the fans responded accordingly. not as crazy, but paying more attention. continuing to make more music die spinne came out with "suicide", a collection of the best live performances they had accomplished to date. this was one of the most exciting tapes ever put together in recorded earth history. by this time die spinne was playing around calgary and they eventually released the album "die spinne visit zombie island" in december of 1997 (and well before any scooby doo movies were even heard of). going closer and closer to the punk side of things then the hypnotics, they haven't recorded since. still playing live shows here and there, the member's of die spinne pursued solo projects during 1998, in 1999, the re-mix album "the art of self love" came out. 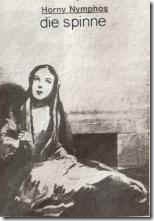 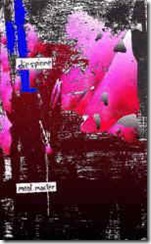 (all above recorded live on halloween)
meat master (part 1-8)

the beginning
the invasion
the dog attack
give me your meat
the rape
the escape
going home
i'm down town
nick's cats
large hands
chicken joe eats pies
meat master was recorded november of 1995, a twenty five minute long song which is split into 8 different parts. it is the story of how earth is invaded by evil aliens who feast on human flesh, in the end of the story only two men are left on earth, and they are forced to re-populate the planet. (the power of gamma ray exposure makes this all possible). also on the album is some songs from a live show played on halloween night 1995. 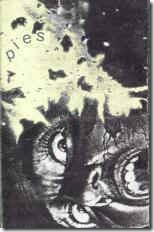 pies was recorded december 1995- january 1996. with pure groovy rock songs and hypnotic songs like never before, die spinne put together what would become the sound of "die spinne". this album is a perfect mixture of every thing die spinne had been working toward to that date. 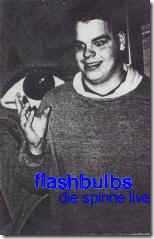 hypnotic qualities
about a man
trix
cats
wolf man
i got someone to love
yellow 52
ting pan
my spider sense is tingleing
cat is psycho
leather boy
my name is cock
basically "pies" live, with some added bonuses. this was recorded at "jessica hausaur's" birthday party. classic songs such as "my spider sense is tingling" can not be found on any other die spinne album. 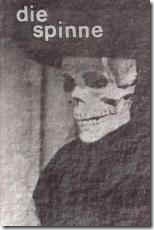 recorded spring of 1997, die spinne went back to the hypnotic side of  the boat. more hypnotic tales of alien invasion are told on this album, as well as the strange songs "light headed", and "the tree of reason". also included are a few particularly exceptional live tracks. 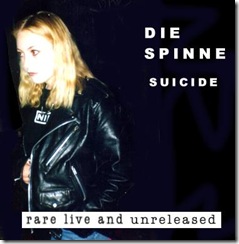 suicide was released in the summer of 1997 as a fan compilation sent out by sc music. it ended up being one of the most enjoyable albums die spinne has produced. all great live moments in die spinnes history were compiled on this one, and the result was an aggressive, and amazing display of the talent that die spinne holds. also on the album are three studio tracks "vampire monster killer machine", "cheese covered items" and, "no arms or legs". these are die spinne at their rock n' roll, punk rock best, and hint at to what the next record sounded like. 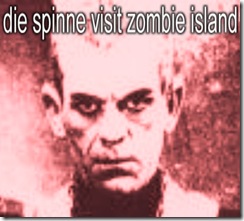 head lice
enchiladas
zombie attack
shirtless hill
no arms, no legs
tickled pink
my head would make a  lovely centerpiece
peanut butter and pickles
red marble home
100 babies
red rubber bitch
in love twice
lick my face
zombie love
zombie island was recorded through out the entire year of 1997, and was finally finished in december. every thing the die spinne embodies is displayed on this album, from punk, to rock and roll, to hypnotics, to the end of the human race as we know it. a better display of who they are cannot be found. scott played guitar for some songs, and paul whittington sings on a couple. the art of self love
re-mixed and re-done

board head -jungle lunatic mix
leather boy -garment extended re-mix
wolf man -lon chaney mix
cats -techno dance re-mix
no arms no legs -hard to dance re-mix
n.u.l. -downtown cheese mix
zombie attack -fuck the bible mix
my name is cock -god gravy mix
leather boy death marchpeti-coat goat -koolaid cream mix (new track)
nearly two years after die spinne visit zombie island, the art of self love came out, in august of 1999. completely mixed and put together by dj fukachuk, this is the slickest and nicest sounding die spinne album. it is what it says it is. "re-mixed and re-done". and has been called "die spinne for the next millennium".