Hello. This isn't Blaise but never mind. He told me to post here if i ever wanted to, but that was a while ago.

Blaise didn't do anything for the SC anniversary on the 27th as far as I know. Him and Terry were going to drive around. Now they didn't do that which means that thank the weirdness of the universe for vaguely connecting SC Entertainment with the ghost universe. In the other place and a bunch of dimensions the celebrations go on forever.

Blaise didn't run out of time. He is simmering in the juice in his brain. And something is happening. But not on the SC Entertainment 25th Anniversary.

The reason is possibly the number seven.

The most common number people pick if you ask them to pick a number between 1 and 10 is 7, for some reason. I learnt that from the Fresh Prince of Bel-Air. SC is 25. 2 + 5 is 7. That means that this is a year of other people for SC. Uncommon people.

In the I Ching, which i do not understand except that it is complicated, and everything and then nothing, the 25th hexagram is Wu Wang, Innocence (The Unexpected).


INNOCENCE. Supreme success.
Perseverance furthers.
If someone is not as he should be,
He has misfortune,
And it does not further him
To undertake anything.


Under heaven thunder rolls:
All things attain the natural state of innocence.
Thus the kings of old,
Rich in virtue, and in harmony with the time,
Fostered and nourished all beings.


So. a few things. There are a lot of things I don;t know which I am sure Blaise could write about here better than me. But some things I know that Blaise did around the 25th Anniversary was get excited about other people to do with SC. The boundaries are blurry of course, which is sort of the tension. Maybe he's scaring himself.
These aren't SC things but they have something to do with SC, because its very exciting, i think. Blaise's friend Vahini sent him 2 issues of the zine she started making. I haven't read it or anything, I only saw the envelope and the paper for a few seconds. anyway. Whatever you need to worry about in your life, somewhere Vahini is making those things, and writing and drawing and the other things she does. Its pretty exciting.

Another pretty exciting thing I know about it Kelton Kolodychuk is making a movie which will horrify you beyond the depths of your crumpled souls, uncrumple you and give you antlers. I don't know when it will be done. He also created the more earworm song you ever imagined which is Fish Berry Goose Brain (i hope that is written right) which is more than worth dancing to. The other thing he did lately was record himself singing and playing guitar with a wolf mask on about how he dances like Zam.... something I can't spell.. but its genius anyway. And he says things all day like "if you say you can't do it then you won't, but if you think anyone can do anything then you might."

Then the other thing that not enough people in the universe witnessed which strangely is a vibrant force not appearing in this journal before i don't think but anyway Mikaela Bridgen perform the 72 hour performance art operetta on The Future Guy. Honestly, thank the stars that you were born in this world, when things like that happen. It was about the future guy and his future clothes which he was selling to people, from a rack. The carnage was unbeatable.

My sister gill has been making clothes. Especially bows and small things with bats and skulls on. She also has unbelievably brilliant hair and snarl. You can see some clothes she designed here:
www.catwalking.com/GRADUATES/GRAD_08/BA_shows/shows/BIRMINGHAM/shows/05-Gillian%20Boyling/index.htm
(that website used to work but i'm not sure it does now)
anyway. she makes clothes that scare people.

And an awful lot more. There are an awful lot more people out there. A lot more than I can write down. Making things and being things. And not exactly SC Entertainment. But very very very connected. And its how it fits together with people around. You know they are out there and you have no reason to stop.
Other people blow my brain up into tiny bit then keep on exploding the bits into smithereens until it turns into goo. and its brilliant.

so hello. and thank you.. and you making the things you make makes me happy even though i had no idea you were doing that..
on August 30, 2008 No comments: 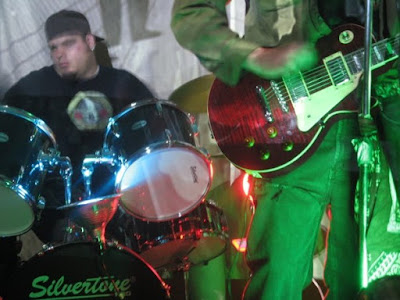 Hello.. it's true. a quarter century of SC Entertainment is upon us...

I was supposed to have a super fantastic new issue of SC Propaganda ready for this momentous occasion... and I was hoping to have some sort of amazing SC festival or something.. somewhere... but alas... time has run out, and I have run out of time to do a lot of things as usual. I hope it doesn't detract from your own personal celebrations.

SC is what it has always been... a place for people to create things, without having to worry about all the things that the world has put in place to make a creative environment a restrictive and sad thing to be a part of. I have done my best over the years to change the entire universe by making weird music in my basements and pointing video cameras at people doing bizarre things... it is only that on the surface obviously.. it is me really trying to bring people together and trying to make people see that things are possible... trying to help the people involved understand all the huge amounts of things that they personally can do that they never thought could ever be possible... and for anyone who gets to see or hear or touch anything that SC has made to open up their minds to realize how big the world can actually be if you look at it in such small pieces. and just by these things existing, it does something for everyone else who doesn't even know they exist...

it would be a nice thing if everyone could just open up and spill out all the things inside...

what i hope for the future of sc... i hope it happens... i hope some how people all over the world will realize that they CAN do what they want to do.. and not worry about feeling stupid or left out or marginalized in any way. SC is about looking at all the things around you that are happening, and really finding all the best parts of it.

you can either watch vacuumicus and see a shitty zero budget monster movie.. or you can see it as something totally amazing that was made out of nothing by some friends who really cared about something special.

thats what i mean by sc.... and my hope is that people can really open up to the amazing things that are possible by EVERYONE.

What can you do to help? Don't walk by when we are planning something huge... find out how you can be a part of it... everyone has something they can do that makes them feel good... and I'm the kind of person who can use what ever you got....

in the mean time..

some more things I have made recently... video from the death ray gun show, and some short movies by death ray gun:
http://www.youtube.com/view_play_list?p=9153C47F7414DF57

the next 25 years will be even more fantastical... and maybe even a few of my predictions will come true...

never give up hope when people care so much about what they do...

Email ThisBlogThis!Share to TwitterShare to FacebookShare to Pinterest
Labels: podcast In other death ray gun related news, there are some new movies and videos available to watch now also....
(click to go to the youtube page)
Tail
Pink Is The Colour
The Death Ray Gun Amazing Adventure Show
Small Amounts Live July 25th 2008
And keep watching for many more things coming soon!