So on Wednesday, April 27th there will be a screening at the Uptown Theater of stuff that was done by my class at school this year.. So you should all come check it out, be there at 6:30
Included in the screening will be "Phaedra's Room" which I wrote and Directed.
also included is Hussein Juma's "School of the Dead", and Leanne Graham's "Urban Canvas" plus a bunch of other worthwhile fare.. it is free to get in, but make sure you come early, as seats go fast.

I have also been asked to play live.. as fukachuk egg machine, at the Calgary Asian Film Festival.. I am well aware that I am not Asian.. but that's okay. At any rate I am starting production on a new fukachuk movie that will be projected during this live show... I start filming tomorrow, it will star my friend Vahini Govender as Mary Kettle. I will be playing at the Calgary Science Center, on the 20th or the 21st... I will update when I have a confirmed date...

The Bo-Bo 5 DVD is done, but I am having a hell of a time actually burning it... I don't know why but it crashes everytime it gets to like 97% done... i will keep working on that i guess.

And remember to go download the new Death Ray Gun record, if you haven't already... and the new Fukachuk record too. 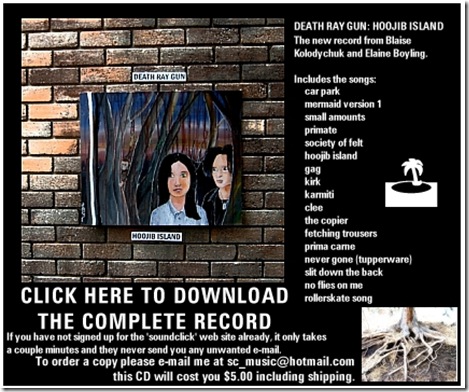 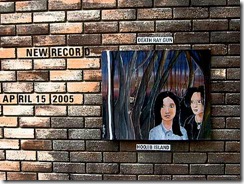 This record will be made available on April 15th 2005. It will cost $5.00. Or if you want, on that date a secret web site will be made available where you can down load the entire album for free. Again, I just want you to hear it... but Giving away so much fukachuk has made me very, very broke, and I can't do it again, no matter how much I want to. So, if you like to feel something in your hands like I do, send me $5.00.. if you just need the music and nothing else, like I do.. then just wait and you will be rewarded.
This is perhaps the most amazing thing that I have been a part of. And you will remember where you were for the rest of your life when you first heard what happened on 'Hoojib Island'

Also, Bo-Bo 5 has finished editing... it won't be long now.
I am doing the score to the film "School of the Dead" on which I was the first assistant director... It will be playing with my film, "Phaedra's Room" on April 27th at the Uptown Theater.