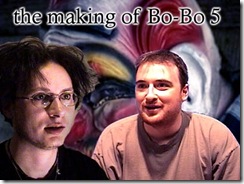 watch the whole film by clicking above!
Includes all new interviews with Blaise Kolodychuk and Paul Whittington, as well as behind the scenes footage, alternate scenes with different actors, and much much more!

If you didn't notice the link to the right, you can now download the entire new record...
Enjoy!

So the record is out now... and if you want it, just ask.. most of the CDs that were requested already will be going out in the mail on monday... and if you don't want to go through me to get your new fukachuk egg machine, you can also get it at:
MEGATUNES and HOTWAX here in Calgary.

And also, even more new music from Elaine: Guts and Sport

The new Death Ray Gun album is in the final stages of being mixed together.. and the art work for the cover is being worked on, so it shouldn't be long now...

I would like to apologize for The super spectacular re-release of Bo-Bo 5 being late, I have just been far too busy the last couple months to have a chance to get in there and finish the edit.. but it is about 80% done. When I have a chance I will post some of the "Making of Bo-Bo 5" Documentary I have been working on.. with all new interviews with myself, and Paul Whittington, as well as plenty of behind the scenes footage.