Today SC turns 21 years old... August 27th 1983 was the day me and Terry sat on the steps in front of his house and we came up with a name for the comic company we had, Terry said "Cool Comics" and I said "We are better than that... how about Super Cool Comics!" (We were like 7 years old... give me a break...) At any rate, Super Cool Comics has turned into SC Entertainment... A place where me and my friends dish out any and every creative thing you could possibly imagine.. The core group of us, Me, Paul, Terry, and Scott have created literally thousands of works of art for your enjoyment, and ours... There have been dozens and dozens of people involved in all of this over the years, and to each and every one of you, all of you people who saw that this was much more than a hobby for us, every person who spent time filling out an order form, or sent me an e-mail or just asked what the next project was going to be, I want to thank you all. In honor of SC I want to post an article I wrote for the last ever issue of SC PROPAGANDA... 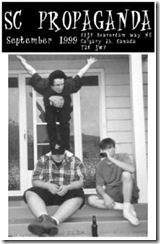 Well as I write this it is the end of the day on Aug. 27th 1999. It has been exactly 16 years since SC first found a name for the cult activities which we participate in. 16 years is a long fucking time to go basically no where. But still we pump out the good times that at most 50 or 60 people know about. Rather depressing … makes me almost want to give up. I haven't had an order since probably like January, and that was probably just more sympathy from our number one customer Al. Why is it no one has really taken an interest in us in 16 years? What the hell are we doing wrong? People used to love us… way back between 1993 and 1995. People really liked the stuff we were doing. We didn't make any money mind you.. but there is more to life than money. People came out week after week to see dads with no face in all their shining glory. (Plus I got to dress in women's clothes a lot more!) Sure we don't play live music as much.. but even when we do, it is a crazy chore just to get people to show up! Like they are doing US a favor or something. We are here for you, we thrive on giving you pleasure, and letting you join in on the emotion of what it is we do. However, 16 years is a long time.. in a few weeks I will be 24 years old. I have two kids, Terry has a child… (kinda..) And it is hard for us to party crazy like we could when we were young. But the music is still there, we both still have the passion, and if any of you actually decided to scrape the five bucks together and get one of our tapes, you would see that we still got it. I haven't received a single order for Leroy goes to hell… I think it is one of the best albums SC MUSIC has ever produced… and you have all missed out. My solo albums, the three fukachuk egg machines, every bit of who I am is in those, yet the only people who have them are my close friends whom I have forcibly pushed them upon. I am so incredibly proud of what I did on the new die spinne album, yet chances are you won't have the time to actually send me an order. It's fucking sad how me and Terry's dream 16 years ago is going to waste. Is five bucks too much? What I am saying is, we do it for you… not for the money. We do it because we love you all… We don't have lavish dreams of rock stardom or anything, we are simply artists who need to be seen and heard. SC is a religion, like any other. And we live by it, and we will die by it. There is nothing we can do to stop our selves from doing what we do… we would do it if there was no chance of any one EVER hearing it. But we would like you to. How many of you people who receive this letter have never even heard what we do? Well, most of it sounds like shit… but there is still the raw passion behind that steaming pile of feces. And I am confident enough to say every thing that has been done since 1997 DOES sound good. So please try us out… we are all that embody what is good about art and music. And happy 16 to my friend SC. For you have given me every dream I have.

I am happy to say we are a little more recognized now than we were 5 years ago... (50 or 60 has turned in to a few hundred that actively know about us) and at this point MOST of what we do doesn't sound like shit any more (we are actually really talented!) but it is all pretty much the same... and now a couple nostalgic photos for you all to reminisce about... happy birthday to us! 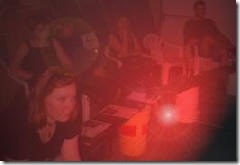 some of the audience at the SC 15th anniversary festival 1998 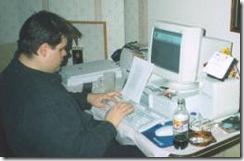 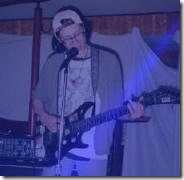 Blaise at the EO reunion show 1994 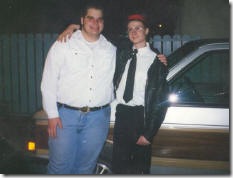 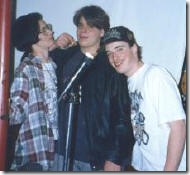 Paul drinking away the pressures of fame  aprx.1994 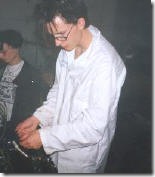 Blaise and Scott playing as SMOTH 1998