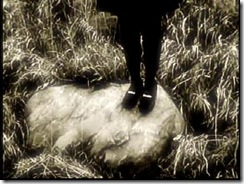 Jenny is on the train tracks, searching for something, as she walks she finds the lizards and dismisses them, she eventually runs into the beaver who tells her what she must do to break free of her miserable existence, she finds jeremy and kills him, she has just become Sindy. 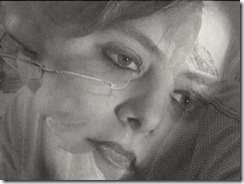 Sindy sleeps while her new found world spins around her, is what she did right? Was it all worth it to have this new life? looking back on her past and all that was lost, someone with far more clarity of the situation helps her to make the decision to redeem herself, the birth of the babydog happens in a dream, but it is up to Sindy to finish the job. As she awakes it all becomes so totally clear what she must do. And the babydog is truly born.

Written and Directed by Blaise and Amanda Kolodychuk

Starring:
Amanda Kolodychuk as Sindy
Colin Sheldon as The Creator of Babydog 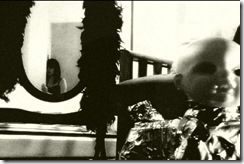 The Girl who avoids animals is taking the train home, when she starts being stalked by 'babydog'... she gets home and falls asleep, she dreams dreams of the babydog and cemeteries, and crows... and when she awakes she is startled to see the babydog looking at her.... she tries to get away, but as fast as she runs, the babydog seems to be just that much faster... finally, cornered in her bathroom, the girl who avoids animals is forced into a realization of how only the babydog can save her from her twisted ways.

Starring:
Fran Van Rooyen as The Girl Who Avoids Animals 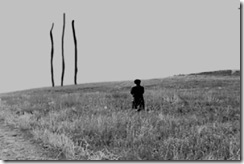 Surgery boy has just bought something from the dead horse store... something that was discarded and abandoned. he makes his way to a home he doesn't know, and meets up with the frog man who tells him what he doesn't want to hear. Finally he finds a place to rest when from the sky emerge two aliens who take control of his actions. Sindy is drawn to Surgery Boy's room, and she willingly sacrifices her life to become Jenny again. The Aliens take her away for reconditioning, and surgery boy is left alone in the room with his bag from the dead horse store... he realizes that he must confront the three sticks if he is ever going to escape from this reality, and he journeys far to find them. Within the bag Babydog emerges to help him find his destiny....

THE TRAGEDY OF MARY KETTLE 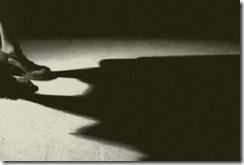 Mary Kettle has moved in to surgery Boy's home, and has decided that the truth about everything should be known. She wants to leave a message for anyone who will follow her, but the baby dog begins to take a great interest in what she is trying to do. She is taken in by the baby dog's charm and she is soon his prisoner. while he watches from another room on a video monitor he has wrapped Mary Kettle in plastic and left her in a bathtub that is slowing filling with water. Baby dog watches as she drowns. But has his creator, Sindy, who has been turned back in to Jenny come back to stop this madness?

The sixth in the series of fukachuk egg machine movies. A look back in time.. at Jenny, and her sister Partridge Mary Rosencamp, and the things that her and Daphne do to make their way to Gilbert Town.

THE SMALL THINGS
the seventh fukachuk movie shows the events that take place after the box and beyond. Sindy looks at herself and sees the things she has done and chooses what significance they have on what she will do with the world around her... meanwhile her world is being created.

2008
17 minutes
Written and Directed by Blaise Kolodychuk
Starring:
Amanda Kolodychuk as Sindy
Katie Priaulx as The Lizard Girl
Babydog as himself